What was the point of the September and October Google update, who could be harmed by it and what we can do going forward to avoid unnecessary risks associated with the upcoming Google updates? All of this is explained – briefly and clearly – by Marcin Gaworski, SEO Expert at Insightland.

The update, admitted by Google, concerned a problem that had started as early as September. That’s when the indexing problems occurred – subpages simply disappeared from the index without any explicit declarations, e.g. in meta robots.

SEO experts from all over the world have made many complaints about this problem, e.g: 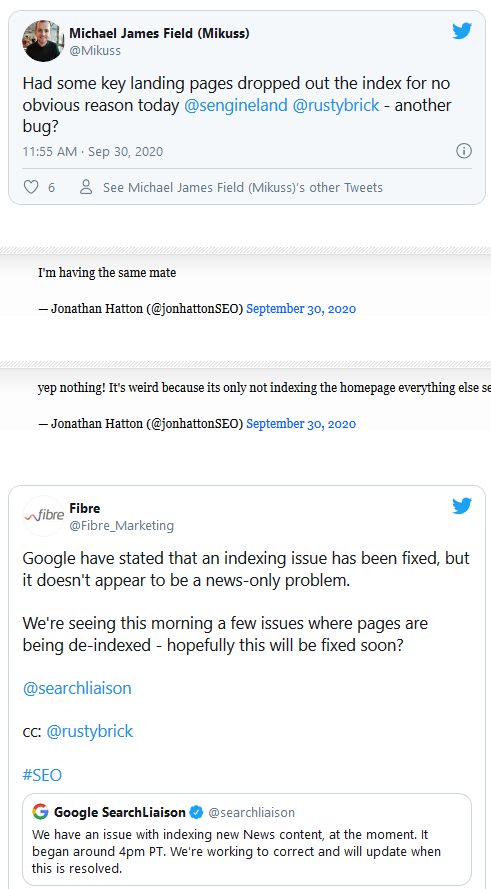 Initially, the update seemed to focus only on news, but it soon turned out that it had affected more elements.

And here comes another inconsistency – Google claimed on 29 September that the problem was solved:

However, this also turned out to be untrue, as evidenced by the reports of users who encountered the issue, and another official admission of the problems by Google on 12 October.

Google claimed that the errors were fixed around 14 October; this is probably not true either, because at that time the issue still existed, as evidenced by measurements of result fluctuations e.g. produced by MozCast.

It is not entirely clear whether the fluctuations that occurred after Google had solved the error are another update of the algorithm, or whether they are simply a continuation of this error.

The most significant problems were related to:

According to different websites, the fluctuations were very strong and could cause a very large “rolling” in the keyword positions:

How to protect yourself from declines after updating the algorithm?

As we know, it is impossible to keep yourself completely protected against Google’s errors, but I think it is possible to minimize losses in advance and reduce the odds of becoming one of the websites that suffered the most as a result of such updates.

I think that optimization of the website structure, its regular verifications e.g. in Google Search Console or preparation of website maps for specific sections – will effectively help Google in correct indexing and thus, to some extent, protect the website against similar problems.

Another very important aspect is the care for the correctness and speed of the mobile version, as – apart from the Mobile First Index – we keep receiving reports on problems with the interpretation of the mobile version by Google. Therefore, more emphasis should be placed on its refinement and more attention should be paid to all aspects related to it.

Clients who have been working with Insightland for a long time, and those who have just started working with Insightland, can rest assured, because none of the aforementioned updates has adversely affected their ratings in the Google algorithm for relevant keywords. From the very first days of cooperation, we have been setting up an individual action map for each of our clients. Our goal is not only to ensure high increases of websites in the future. We also take care to protect our clients’ websites from potential problems that happen after some Google updates.

Regular optimization of the website structure and its verification in the Google Search Console, as well as preparation of individual maps of the website sections, ensure correct indexation. For this update, after incorrectly indexing the subpages and a quick update in the GSC – the subpages were restored and their positions returned to their place on the very next day (with some of them going up in the ranking). Therefore, after two Google updates in the autumn, none of our clients had to count their losses.